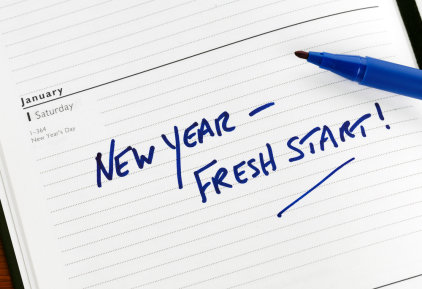 With the new year approaching, you’ll see even the closest of friends can differ in their beliefs about making a New Year’s resolution, and I’ve found there are three different mindsets when it comes to their choices.

Most of what they say about having a resolution is it’s likely you’ll break it, so why set yourself up for a failure right away? Or that there’s no reason to wait for the new year to take on a new routine or challenge. Logic based without any of the heart (because they’re trying to keep it from breaking).

These are the people who thrive when they challenge themselves to complete a task. They are excited at the symbolic shift in time, a fresh beginning marked on January 1: anything they didn’t get to in the last year or a new goal spurn them forward. A “oh yeah? Let me prove it to you,” attitude often gets them far.

Somewhere between the far left and right are the central majority who aren’t sure whether or not they’re ready to commit to something that might make them a failure but adore the idea of starting fresh. We’re the group who values hard work and hope, but juggling them can be intimidating.

Here’s what I have to say:

If you’re here, it’s because – on some level – you value a side of life that isn’t entirely based in logic. You believe there is something greater than you working in the Universe, something big enough to change the course of your life (whether good or bad).

Why not give yourself permission to place value in that belief and show it you’re ready to trust?

It doesn’t truly matter if you start on January 1st or June 22nd. Or if you create a vision board or pen your goal into your journal. Whatever it is that you want to reach, you only have to declare it and work toward it.

Everything you’ve done leading up to this moment has been progress toward your goal. Mistakes are lessons we glean from and regrets are reminders of what still needs to be healed. As long as you are putting one foot in front of the other, there’s nothing stopping forward movement. Now is the time for reflection: a chance to look at last year’s road blocks and find a better navigation system.

If you wanted to lose 15 pounds and gained 5, find what was holding you back and shed it.

If you thought you’d find your soul mate or wanted to earn more money in business, find the why you didn’t and keep moving.

Sometimes we want so badly to put reasoning (or blame) on an outside force and – in doing so – we don’t realize how much power that takes away from ourselves.

You, my dear friends, are strong enough to keep walking, brave enough to face adversity, and deserving enough to make 2016 the best year of your life.

Your resolution? An announcement shouting your worth.

And you absolutely deserve it.